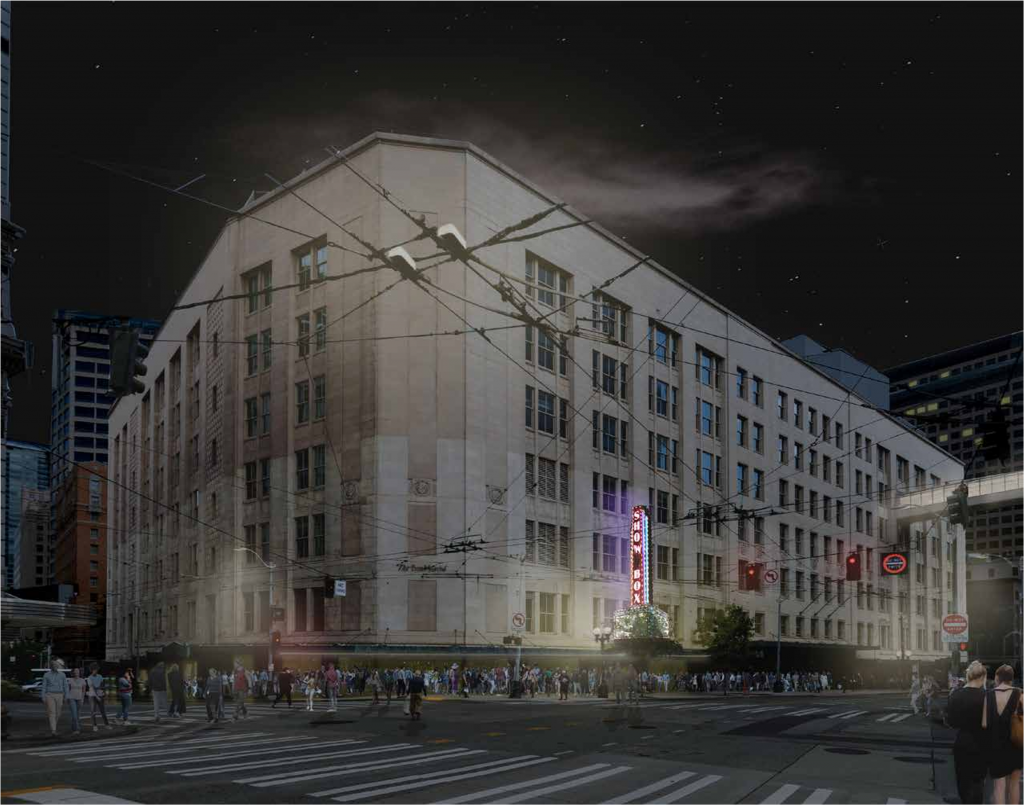 We announced in January 2019 that Sortis had won the development award to revitalize and redevelop the flagship downtown Seattle Macy’s for Starwood Capital Group, led by Sortis Holdings’ affiliate Third & Pine. As of April 2021, the journey has come full circle.

The Seattle Times reported that “Amazon said it will continue leasing six floors, enough space for about 2,000 employees.” Amazon expects its employees to return to the office this year. In addition, the building “will include spaces for lease from 3,000 square feet to 16,600 square feet and potentially a food hall.”

“The sale of the historic building comes as downtown has been hard hit by the pandemic and a vast shift to remote work… The deal ‘reflects our mutual confidence in the region and specifically in downtown Seattle, where we look forward to strengthening the heart of Seattle’s retail core,’ said Urban Renaissance Group CEO Patrick Callahan in a statement.

The Bon Marché building is a Seattle Historic Landmark and was subject to the City of Seattle Landmark review process. The eight-story building of approximately 800,000 square feet was fully rehabilitated including a seismic retrofit, a new six-elevator core, new mechanical and electrical systems, the addition of two 4,000 square foot clerestories, and a spectacular 20,000 square foot rooftop deck amenity.

As reported by the Seattle Times, the building “will now feature a timeless façade, a 20,000 sq. ft. rooftop deck, one-of-a-kind interiors, and 15-foot tall ceilings with ornate colonnades and dramatic architectural features that originate from the 1920’s era department stores.” More

“We have come to the end of a long journey that started in 2005 by acquiring the Seattle Macy’s Garage. After development conversations with Macy’s starting as early as 2006, culminating in a deal in early 2015, the journey of redeveloping this great old building began.”

“We acquired and developed this building in 3 phases with the final phase nearing completion later this year. A special thanks to Starwood Capital, Bayley Construction, CallisonRTKL and the rest of the great team that made this project happen. Being able to save the original Macy’s Star in 2019 and then rebuild a new replica Bon Marché Star was one of the great highlights that will bring back memories each holiday season.”